Surfing a River When the Wave Doesnt Move 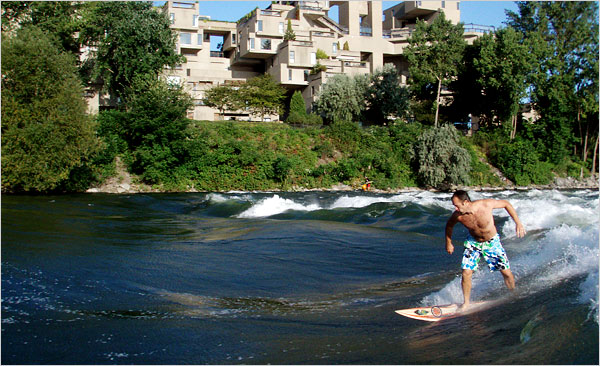 Corran Addison
Near Habitat 67 in Montreal, created by water flowing over a depression.

By JESSE HUFFMAN
Published: July 10, 2009
TO the uninitiated, the scene on a recent morning along the St. Lawrence River in Montreal might have inspired confusion. Behind the striking modular apartment complex known as Habitat 67, a crowd of surfers slipped into wet suits and waxed up their boards, 500 miles from the nearest ocean beach. 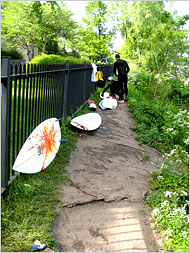 Lined up to surf the standing wave in the St. Lawrence River.

They were preparing to surf a standing river wave in the St. Lawrence, where high-velocity water roars over a steep river-bottom depression, pitches back and upward, and creates a waist-to-overhead breaker. Surfers paddle into it or swing out by rope to catch the green-faced wedge, rewarded by a seemingly endless ride.

Once youre carving, its exactly the same feel as on an ocean wave, said Chris Dutton, the founder of the Web site surfmtl.com, except that instead of going straight down the line, you carve a little bit, flip around, carve back, and can .

Modern river surfing on standing waves evolved on the Eisbach River in Germany in the mid-1970s. Tidal bores have been ridden for years on the Severn in England; in Bordeaux, France; and on the Amazon. New standing waves are being pioneered almost daily in rivers in places like Colorado, and in Ontario and Alberta in Canada. Corran Addison, an Olympic kayaker and three-time world freestyle kayak champion, was the first to tackle the Habitat wave with a surfboard, in 2002. Mr. Addisons river-surfing school, Imagine Surfboards, has taught 3,500 students since 2005, and has expanded to include a surf shop and board line. A second Montreal river-surfing school, KSF, has hosted 1,500 students a year since 2003. From fewer than 10 original surfers, Mr. Addison estimates the current participants to number around 500.

The wave quality was low on my first day at Habitat 67, Mr. Addison, my instructor that day, explained. Instead of the usual method of getting into the wave — starting upstream and allowing the current to draw me into place — I would start downstream from the wave lying flat on the board, and use a rope to counter the rivers flow, swinging out into position, popping up into a surf stance, and then making my way into the wave.
After scrambling down a steep embankment to the edge of the river, I got my first close-up look at the wave; a humplike wall of water surrounded by a torrent of rapids, with a lone surfer rocking back and forth just below the peak. The locals made the approach look fluid and easy. Of course, it wasnt. Even with a wide, seven-foot-long fun shape board, all the forces — raging waters, the tension of the rope, my own weight — conspired against gaining balance and stability, and I lost the rope and was flushed down the rapids, repeatedly.

Still, unlike at the ocean, where I would have faced a battering shore break and a lineup of experienced surfers anxious for the next set, all I had to do to try again was climb the riverbank and walk up the path.

In the river youre going against the current — that dynamic itself makes it more complex, said Costas Kanellos, a Montreal native who started river surfing in 2005 and has since taken to ocean surfing in Maine and Florida. But having a consistent wave allows a lot of people to improve at a quicker rate than they would in the ocean.

Mr. Dutton was my instructor for my second crack at Habitat 67. First he demonstrated how to maximize the rope with body positioning: like a water skier angling far out from behind the boat, I had to remain upright to leverage the strength and weight of the torso as a counter to the force of the rope. In the water, Mr. Dutton had me start out on my knees, so I didnt have to get up from a prone position. Despite the fatigue in my arms, I stood up, leaned with all my body weight, and carved away from the riverbank.

Nearing the wave, I turned the board upstream and released the rope when I was inside the wave. A dense, solid but fluidly dynamic water surface rushed beneath my board. It was a moment of mild vertigo, depth and perspective hard to pinpoint in such an alien environment. I lasted a few fleeting seconds before washing out the back, long enough to feel the potential.

When we left at 6 p.m., there was a five-person lineup forming, with a parking lot full of more surfers, off work and getting geared up.

Though river surfing is in its infancy, the familiar complaints of overcrowding are already being heard. On a peak summer weekend with ideal river conditions and good weather, Mr. Addison said, the lineup can grow to 50 people. The bad thing would be if surfing continues to grow in popularity, he said, and you show up in March to a 50-person lineup, never mind August.

Mr. Addison and others have turned to creating their own river waves using artificial obstacles. In 1997, he helped design a wave park in Valley Field, Quebec, now an Olympic kayak-training center. A similar whitewater park on the Arkansas River in Pueblo, Colo., has become a destination for river surfers.

Mr. Addison proposes to use sunken concrete blocks to engineer four more standing waves in Montreal, at an estimated cost of 40,000 Canadian dollars each, though he has so far received little governmental or corporate support.

IF YOU GO
Habitat 67 is at 2600 Avenue Pierre-Dupuy in Montreal. From Autoroute Bonaventure 10, take Avenue Pierre-Dupuy north. Park in the pull-off to the right, just past the street address. Walk behind tennis courts and down a dirt path; the wave itself is easy to spot, just down the embankment.
Some information is online at www.surfmtl.com and www.surfmontreal.com.

SURF SCHOOLS
Imagine Surfboard, (514) 583-3386
www.imaginesurfboards.com/eng/surfschool.html.
KSF School of River Surfing and Kayaking, (514) 595-7873; www.ksf.ca (in French).
This article has been revised to reflect the following correction:

Correction: July 14, 2009
Because of an editing error, an article in the Escapes pages on Friday about river surfingon the St. Lawrence in Montreal misidentified the Web site founded by Chris Dutton, a surfer interviewed in the article. It is surfmtl.com, not Surfmontreal.com.